RULE 1. OVERVIEW
SECTION 1. THE FIELD
Article 1. Standard dimensions of the field are 60 yards long by 25 yards wide with 7 yard endzones. Approved field sizes may fluctuate from 53-64 yards long when necessary, or 23-30 yards wide. Endzones should not be shorter than 5 yards.

Article 2. Minimum 4 players to start a game. May only have up to 5 players on the field at any one time.

Article 3. A coin toss determines 1st possession. The team can elect to have offense, defense, defer or direction. Choice in the 2nd half will be awarded to the team that did not have the choice 1st half or team listed first on the schedule or the app

Article 4. The offensive team takes possession of the ball at their 5-yard line and has four plays to cross mid-field. You may choose to “punt” on 4th down where you would forfeit the down and the opponent would start with the ball at their own 5 yard line. If you go for it on 4th down and do not get a first down or touchdown, the opponent would take over at the spot. Once a team crosses mid-field and achieves a first down they have 4 plays to score. If the offense does not score, the ball changes possession. All drives start from the 5-yard line with the exception of an interception.

Article 5. No blocking is allowed. No intentional contact is allowed.

Article 6. Mercy Rule: No Mercy Rule during pool play games.  During bracket play, if a team is up by 28 or more points at any time during the contest, the game will end. Mercy rule in League is 28 points in 2nd half

SECTION 3. EQUIPMENT (Helmets are required in every League except Eagle Mtn Saginaw but highly  recomended for player safety. Mouthpieces required in every League
Article 1. Teams must have the same color shirts League and have an alternative color for Tourney Play (one dark color/one light color). They do not have to be official uniforms. If both teams are wearing the same color, there will be a coin toss, and the losing team will need to change into a different color. Failure to provide a secondary uniform or unwillingness to change will result in a forfeit.

8U and below: Pee-wee, junior, and youth size ball allowed
9U-12U: Junior and youth size ball allowed
14U: Youth size ball (with option of using regulation high school sized ball)
Article 3. , Youth Shruumz, or Sonic Flag-a-Tag flags (if custom flags are worn they must be of equal dimensions as Sonic flags). Flags will not be allowed that have been altered (cut, taped, etc.). Mushroom Flags are not allowed for youth. The flags cannot be the same color as a player’s shorts. Mouth guards and Helmets are required as well as non pocketed shorts

SECTION 4. COACHES
Article 1. Coaches are volunteers whose role it is to help young people learn to play and enjoy football. Parents are encouraged to support their youth and their coach at all times.

Article 2. Coaches (1 Coach per Team) in the 8U and under divisions (only) are permitted on the field no close to assist players with their position alignment and mentoring on offense only (no coaches allowed on the field while on defense). At the snap, on-field coaches must be 5 yards behind the quarterback.

Article 2. Each team has two 30 second timeouts PER GAME. If a time out is called after a TD the clock will not run until the change of possession and the offense snaps their ball.

SECTION 5. FIRST HALF CLOCK
Article 1. The clock will run continuously during the 15 minutes of the first half unless a team timeout is used or play is stopped by an official (e.g. deal with an injury, challenge, referee conference, game management purposes, etc.)

Article 2. The head official will give a verbal two-minute warning (for rule specific changes inside 2 minutes)

Article 3. The clock will run during point-after-touchdown attempts (PATs) in the first half unless the defense opts to use a team timeout.

SECTION 6. SECOND HALF CLOCK
Article 1. In the second half the clock will run continuously for the first 14 minutes unless a team timeout or an official’s time out is used.

Article 2. The one-minute warning will stop the clock in the second half if the score difference is 8 points or less.

Article 3. The head official will give a verbal two-minute (for rule specific changes) and one-minute warning as close as possible to the actual marks but will not interrupt a live play.

Article 4. At the one minute warning officials will use a ‘PRO/Controlled’ clock mechanic for the remainder of the contest.

Article 5. The time remaining on the clock will be announced after every play inside the final two minutes of the contest.

RULE 2. OFFENSE
SECTION 1. RUNNING
Article 1. The quarterback may not run unless the ball has been thrown back, handed or pitched to him or her in the backfield.

Article 3. Pitching (backwards/laterally) is allowed downfield (unlimited). Handoffs are allowed in front or behind. A handoff DOES NOT count as a lateral/throwback.

Article 4. A forward pass DOES NOT have to cross the LOS to be a legal play.

Article 6. No run zones are located  5-yards before the end zone.  You may not run the ball in the no run zone (5-yards before end zone), only forward passes are allowed.

Article 7. Ball is spotted where the ball is at the time of the flag pull. The ball must break the plane of the midfield or goal line to be considered a first down or touchdown.

Article 8. Players may NOT block down field in any form.

SECTION 2. PASSING
Article 1. The quarterback has 7 seconds to pass the ball if there is no rush. If the ball is not thrown, then the play is dead. After the ball is ruled dead it is returned to the line of scrimmage.

Article 2. Once the ball is handed off or pitched backwards the 7 second count stops. If the defensive team rushes, then there is no 7 second count.

Article 3. There is no arm in motion, if the ball is in hand when the quarterback’s flag is pulled then it will be ruled a sack.

Article 4. Interceptions may be returned.

Article 5. The rusher may not have any contact with the QB (no hitting the QB arm or knocking the ball out of the QB hand).

Article 6. If ANY part of the players body is behind the LOS it is a legal pass

SECTION 3. RECEIVING
Article 1. All players are eligible to receive a pass, including the quarterback, if the ball has been pitched or handed off in the backfield.

Article 2. Players must have at least one foot in bounds when making a catch.

RULE 3. DEFENSE
SECTION 1. RUSHING THE QUARTERBACK
Article 1. Rushing is ONLY allowed for 8U divisions and up and is NOT allowed for youth ages 7U and below.

Article 2. Players that blitz/rush the quarterback must be a minimum of 7 yards from the line of scrimmage when the ball is snapped.

Article 3. The 7 yards will be measured off by a referee.

Article 4. Players that are not 7 yards from the line of scrimmage when the ball is snapped may not enter into the backfield until there is a change of possession.

Article 5. The blitzer/rusher is allowed a direct lane to the quarterback as long as he or she rushes from either side of the center or outside the bunch formation. The offense must avoid interfering with the rusher if he or she has established a lane. Officials will announce LANE or NO LANE for rushers/blitzers prior to the snap. This is a judgement call/decision based on the spacing between the players in the offensive formation.

Article 6. The rush of a blitzer has to be immediately after the snap, quick and straight towards the point where the quarterback receives the snap in order to retain the right of way. If a blitzer is rushing late, slowly, aiming at another spot, changing direction during the rush or just does not rush the quarterback, the player loses the right of way but still can participate as any other defensive player.

Article 3. A player may “find” their opponent by reaching out and placing a hand on them as long as touching does not delay, impede, twist, or turn their opponent.  This is not considered pass interference.

Article 4. A player may use their arms or hands to intentionally obstruct the receiver’s view (face guarding) of the ball without turning their own head to play the ball as long as noteworthy contact is not made with the receiver.

Article 5. If defensive pass interference occurs in the end zone the ball will be placed on the one-yard line, automatic first down.

Article 6. Interceptions may be returned. Interceptions in the end zone that are not returned to the field of play will result in a touchback and the ball will be spotted on the 5-yard line.

Article 7. Contact away from the direction of the pass is not considered pass interference but may be considered illegal contact.

Shoving or pushing off to create separation.
Playing through the back.
Hook and turn: grabbing the torso and turning an opponent before the pass arrives.
Arm bars, hooking, restricting, grabbing wrists, or turning a receiver.
Blocking downfield before the ball has been touched, commonly seen through “pick plays”.
RULE 4. SCORING
SECTION 1. POINTS
Touchdown     · 6 points
Point After Touchdown (PAT)
· 1 point from the 5-yard line (no-run zone in effect)

· Interceptions returned on PAT’s are worth 2 points

Safety     · 2 points
SECTION 2. POINT AFTER TOUCHDOWN (PAT)
Article 1. Following a touchdown, once the scoring team has informed an official of which point conversion choice they want to attempt, the decision cannot be changed unless the scoring team uses a team timeout.

Article 2. If a penalty occurs during an extra point attempt, the penalty will be assessed but the extra point value remains the same.

Article 3. Decisions cannot be changed after a penalty. For example, if the offense attempts a 1-point PAT and is penalized five yards for a false start, they cannot change their mind and go for a 2-point PAT. They will still be attempting a 1-point try even if they call a timeout.

Article 5. Dead ball fouls committed by the offense that do not carry a loss-of-down penalty (false start) may result in penalty yardage assessed and the down replayed.

Article 6. Fouls by the offense during a successful PAT attempt that carry a loss-of-down penalty (flag guarding, illegal advancement, illegal forward pass, etc.) will result in the PAT being no good.

Article 7. Fouls committed by the offense in unsuccessful PAT attempts will be declined by the defense and the PAT will be “no good” and will not be replayed.

Article 8. Fouls by the defense during an unsuccessful PAT attempt will result in a retry after the options are administered.

Article 2. Teams will go in reverse order if more then 1 OT is required

Article 3. Teams can elect to go for 1 or 2 points

Article 4. Winner will be determined once the value of the extra point exceeds the other team’s attempt.

SECTION 4. MERCY RULE
Article 1. No Mercy Rule during pool play games.  If a team is up by 28 points or more during tournament play at any time, the game will be over.


Yardage     Where is the Penalty Assessed?     Result
Personal Foul/Unnecessary Roughness     15     End of the play or previous spot     By the Offense: Loss of Down
By the Defense: Automatic 1st Down

Unsportsmanlike Conduct     15     End of the play or previous spot     By the Offense: Loss of Down
By the Defense: Automatic 1st Down

SECTION 2. INSIDE 2 MINUTES
Article 1. All penalties inside of 2 minutes of BOTH halves remain the same except: 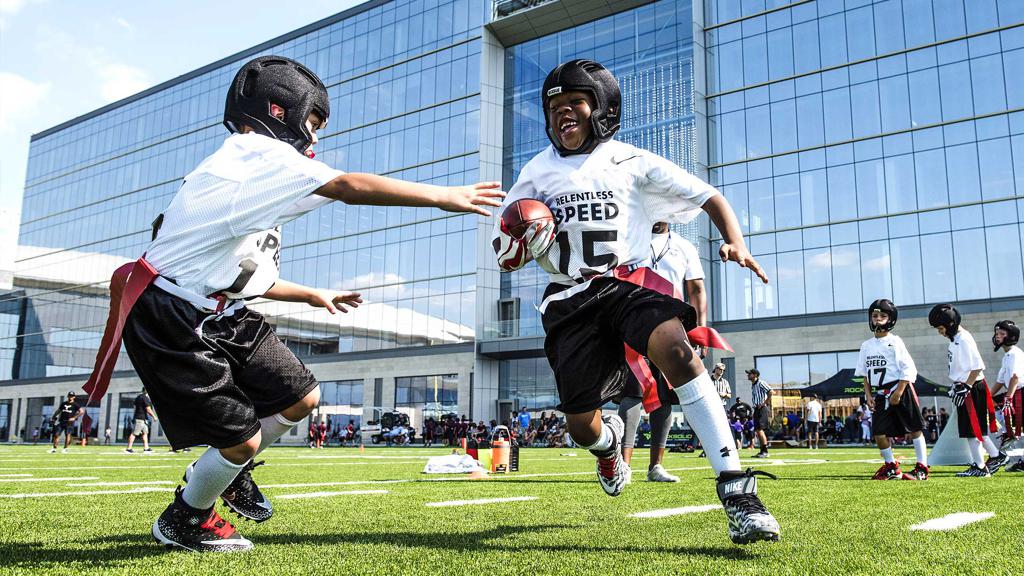 Coaches, the Texas Summer Series is open to all 5v5 Youth Flag Teams in the State of Texas. We have 4 Summer dates set for 6U, 8U, 10U & 12U Divisions with a 3 gm guarantee.  Trophy & Championship rings for winning teams per division along with Offensive & Defensive Tournament MVP 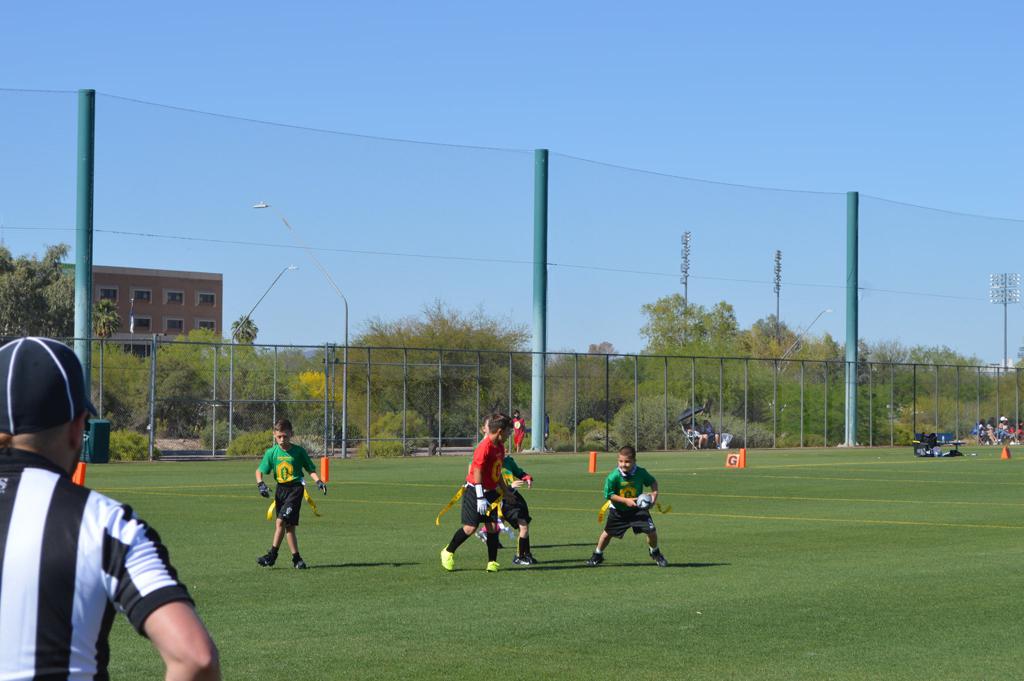 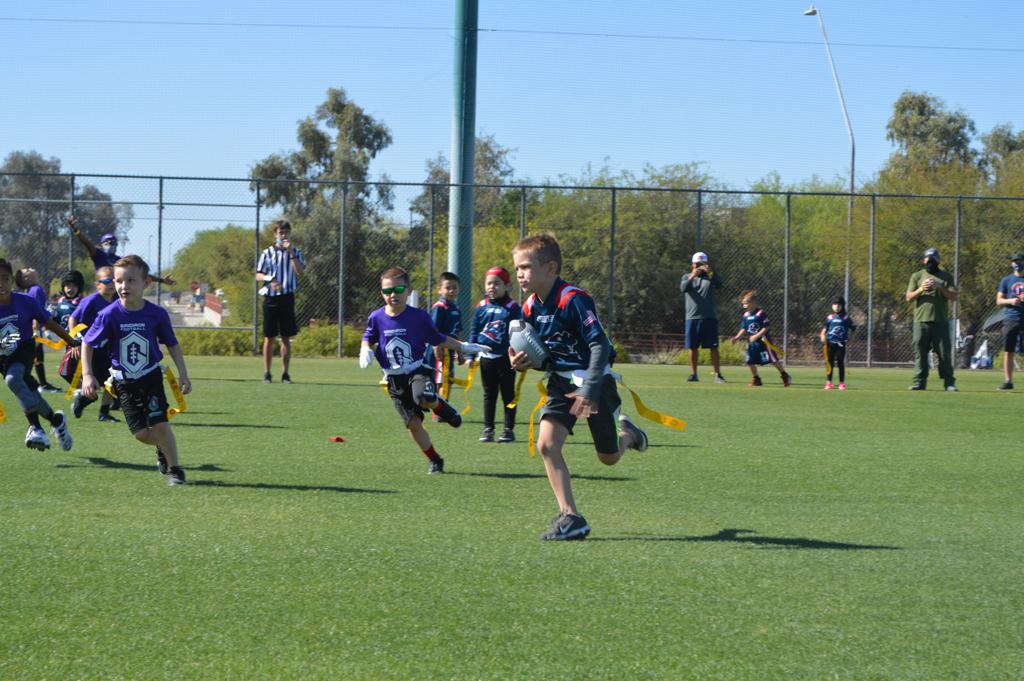 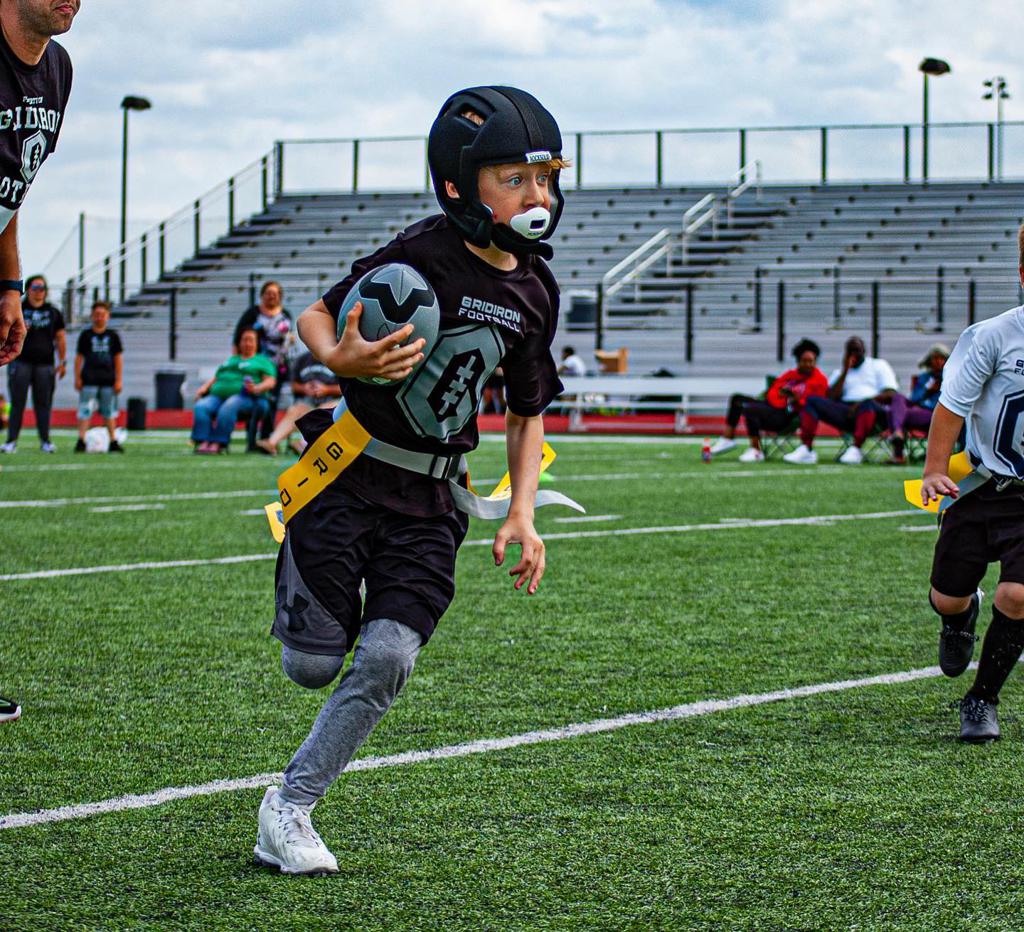 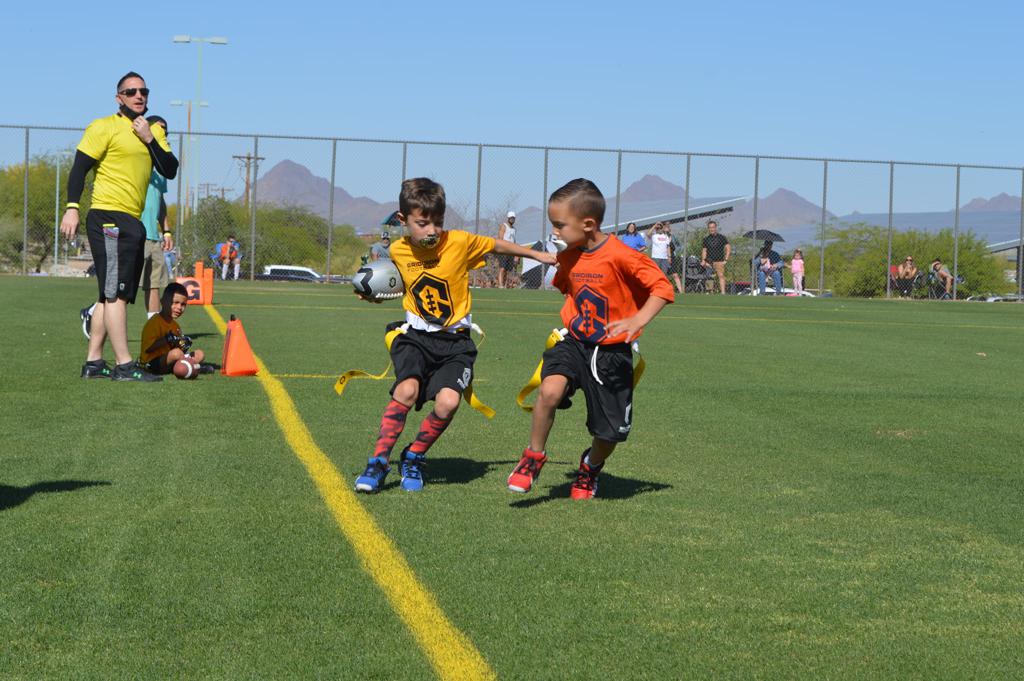 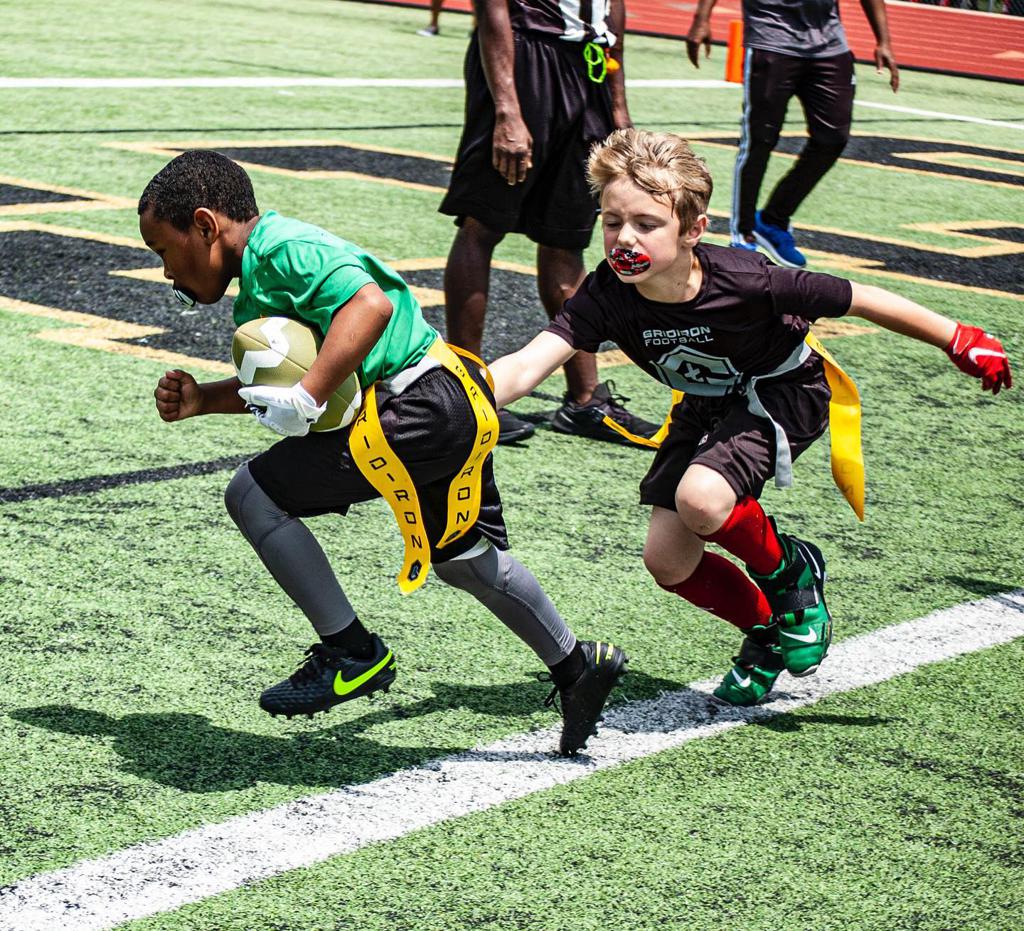 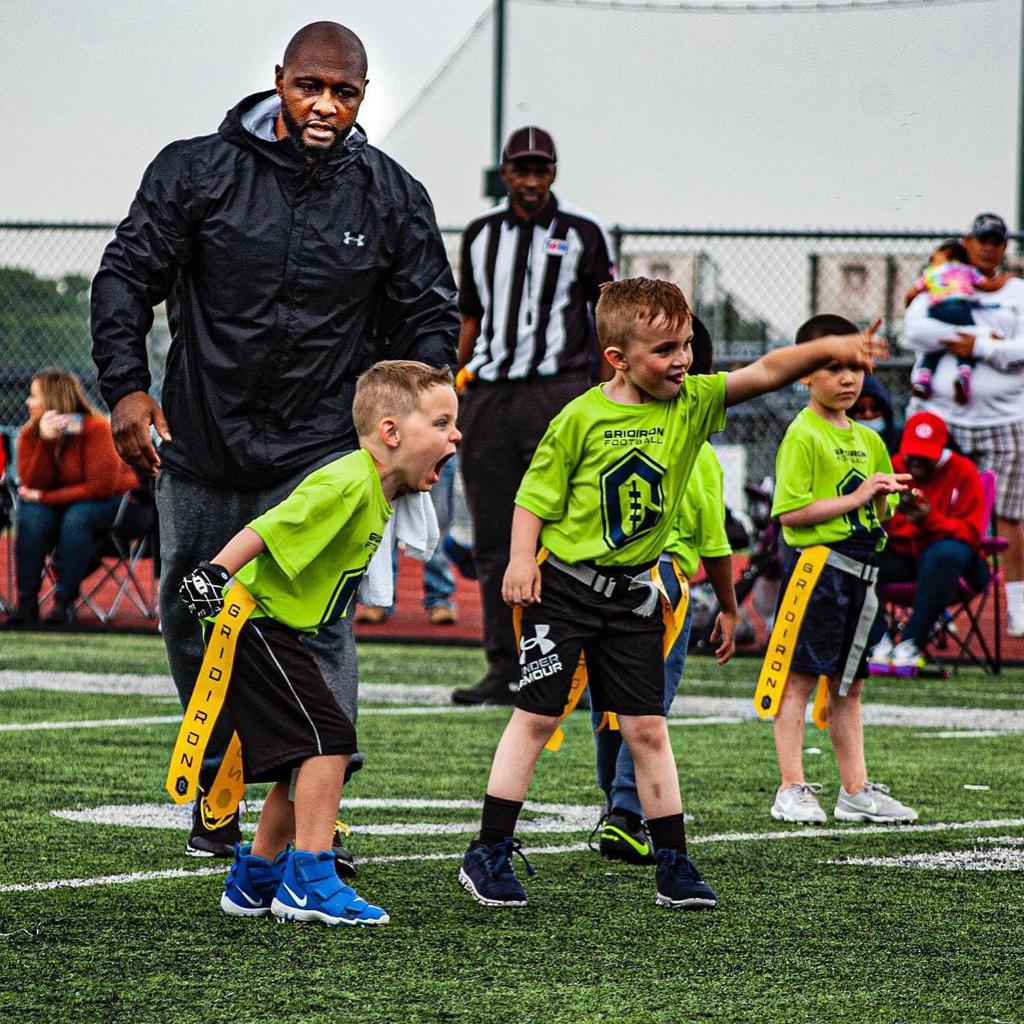 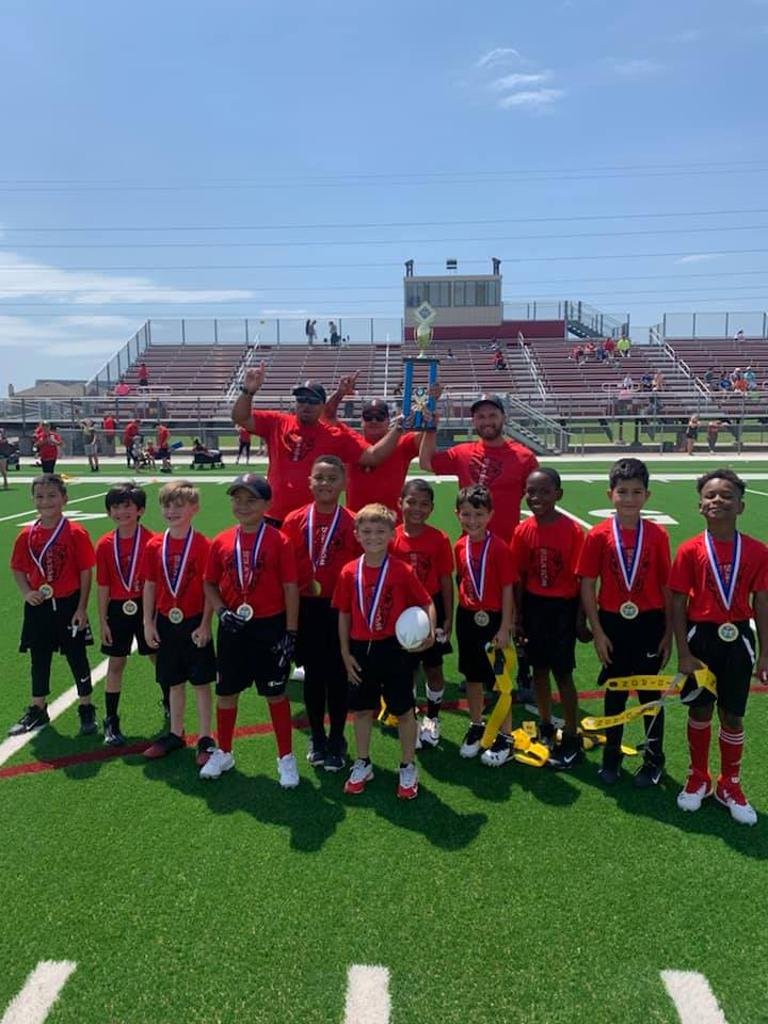 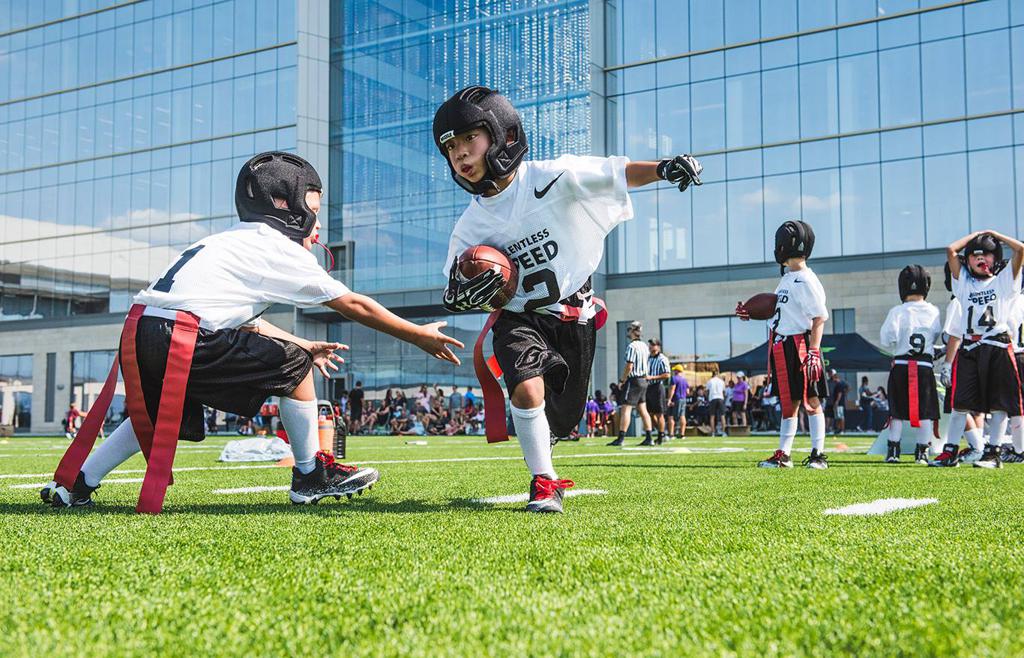